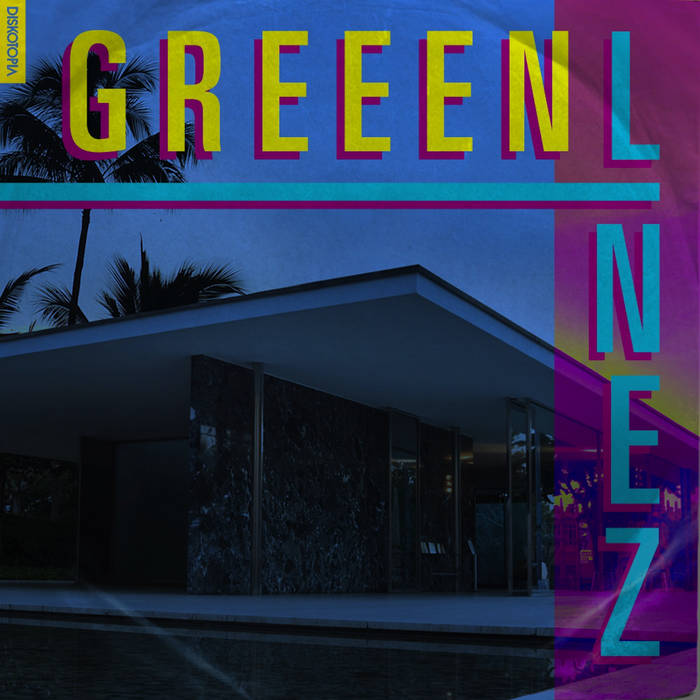 In a slight change of direction, Diskotopia release the debut from Greeen Linez just in time for summer. The Greeen Linez EP is the result of a new collaboration between Matt Lyne (aka A Taut Line) and Chris Greenberg (one third of the band Hong Kong in the 60s). Matt and Chris first met and started playing dance music together over 15 years ago, before they were even in their teens. Now, many years later and separated by two continents – Chris still lives in Cambridge, where they both grew up, whilst Matt has been living in Japan for over 6 years – the pair have decided to return to the musical sounds and styles that first excited and inspired them as youngsters. This EP is a trip back to the days when Cambridge still had multiple independent record shops (it now has none) and double-cassette dance compilations were the order of the day. However, as the clichés go, the past is a different country, and you can’t go home again, so this EP filters all those nostalgic influences through everything Matt and Chris have heard and experienced in the intervening years.

Streetdancer combines the synthesized R&B sounds pioneered by producers such as Leon Sylvers and Jam & Lewis with the euphoric Euro-house that dominated much of mainstream radio in the early ‘90s. Summer Bounce returns to the halcyon days when the sun-kissed, low-slung funk of West Coast hip-hop was ubiquitous throughout the world. Regardless of what the weather was actually like in the UK during that period, hazy recollections of the time now seem to recall a joyful and endless summer, and this track aims to recapture those dream-like memories.

Moonlight Affair is deeply influenced by the nocturnal atmospherics of tracks such as Maze’s Twilight and Sha-Lor’s I’m In Love – recordings that Matt and Chris first came across on Beechwood’s legendary Mastercuts series of compilations – as well as Carl Craig’s epochal Landcruising album.

The EP’s remaining two tracks are as rooted in visual influences as they are in musical ones. In the case of Crystalline Vision, life-changing late-night viewings of films such as Blade Runner, Manhunter, Risky Business and especially the work of John Carpenter provide the impetus, as much for their transporting atmosphere and visuals as their amazing music. With the closing track, Feel The Pressure, Matt and Chris have gone back to their early memories of classic music TV: the heavy rotation of high-energy videos such as Madonna’s Vogue and C+C Music Factory’s Gonna Make You Sweat, as well as programs like Dance Energy and The Chart Show, all of which provided the aural and visual wallpaper to the duo’s childhood years.