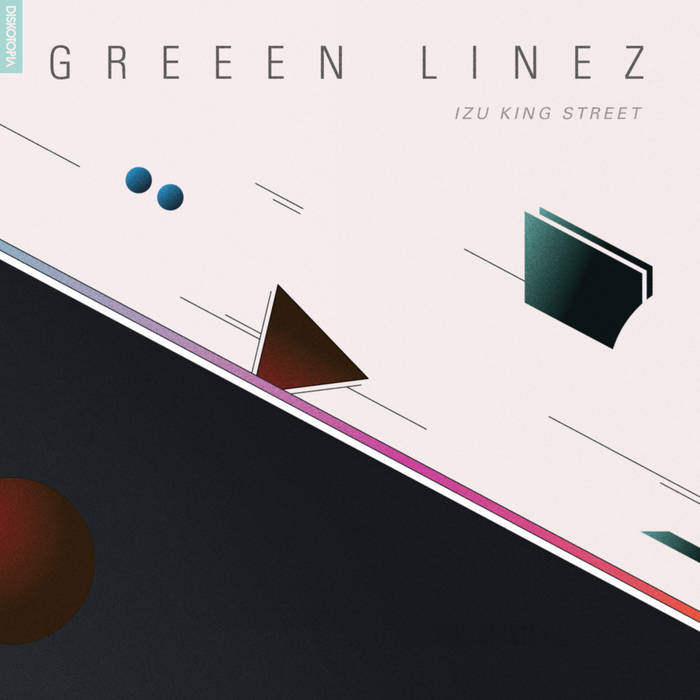 Izu King Street is the second album by Greeen Linez, following their popular and acclaimed debut Things That Fade - which itself was followed by two successful 12” EPs and extensive remix work. The remit for this album was simple: more melody, more complexity, more ambition and less sampling - taking the music both further out and further inward.

Moving on from the more straight-up dance-pop and BGM funk of their earlier work, this time Greeen Linez drew inspiration from artists such as Paul Hardcastle and Larry Heard, whose work straddles the boundaries between dance music, new-age/ambient and jazz - and most importantly, as was the aim for this album, creates a self-contained world in which the listener can lose themselves.

The duo also took much encouragement and motivation from the many like-minded artists whose paths they have crossed since their earlier releases, either through remix work or other collaborations: artists like Magic Touch, Sorcerer, Seahawks, Moon B, the idol group Especia (whose saxophonist Yoshihiro Nakagawa guests on two tracks on Izu King Street) and the Japanese producer and guitarist Awa (who once again collaborated on this album).

Izu King Street takes the listener on a journey through a fantasy realm of memories and dreams: from the neon-lit city streets and gleaming corporate spaces of the opening tracks, through the wistful dreamscapes at the album’s heart and on to the tropical heat-haze of the closing numbers. Rhythmically and sonically varied, but conceptually and atmospherically cohesive, and taking the established Greeen Linez sound to new and exciting places. Close your eyes, drift off and enjoy!